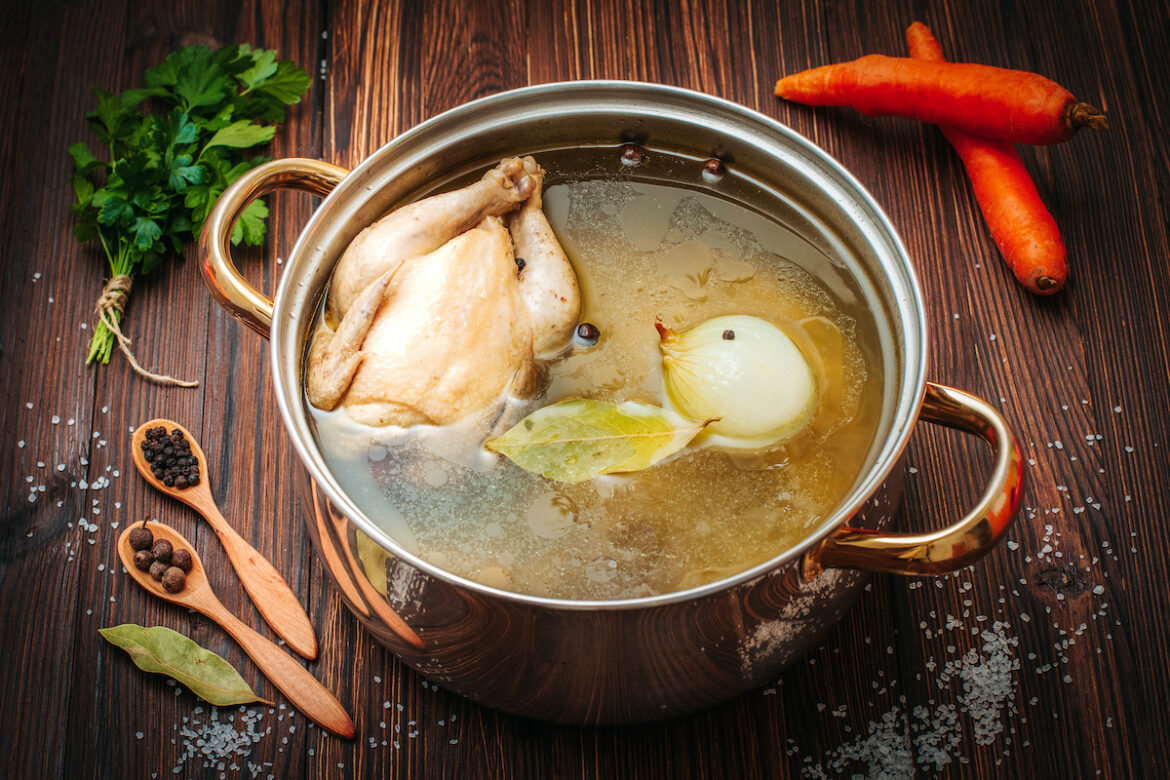 Healing Chicken Soup is a bowlful of pure soul

The alpha and omega of chicken soup – no matter what research you conduct you will always return to one profound thought…it makes me feel so damn good!

The beginning – Chicken soup has been around for over 12,000 years when farming became a part of cultures. Traditionally, a good healing chicken soup is achieved from the boiling of the whole chicken and should result in a thin nutrient-packed broth. Recipes are handed down from generation to generation, from mothers and neighbours and chefs, to ailing recipients who slurp up a bowl or two and feel magically better.

Chicken soup, for me, is not only about the goodness simmered together, it is about the kind, pure soul who took the time to lovingly make me medicinal food. The thought and time and love that goes into the making of the soup is incomparable. Maybe this is half the healing properties of a good chicken soup, hmm?

We all have a chicken soup story, a moment or time when we were feeling utterly shite and some kind soul popped by with a big bowl of healing goodness. Within hours we feel so much better we find to strength to go on the mend. I have had many requests for my chicken soup and I gladly share the recipe, but it is about time I post the recipe on this blog.

For the best soup, start with the best chicken, preferably a local organic chicken (3.5 pound size is plenty). Opt for clean ingredients when it comes to vegetables – local and organic vegetables, lots of thyme, and do not forget the lemon. One other tip…take a moment to thank the chicken for the giving up of its whole self to heal your loved ones.

Every culture seem to have a version of chicken soup – For time immemorial, people all across the globe have been simmering chicken and vegetables in homemade broth. Some renditions are spicy, others mild; some include coconut milk or tomatoes, others demand a clear broth. And although you’ll always have a soft spot for the recipe you grew up on, these international renditions are so very worthy of your spoon.

Not in the mood for soup? Then try my Roasted Chicken made with Kythira salt. What I love about whole chickens is that it is like the bread and fish myth…it just keeps on giving. You know what I mean, one roasted chicken will give you 5 different meals served up five different ways, right?

Scroll right on down to the recipe, or learn more about the science behind the soup:

The ending – Rhinoviruses (viruses that cause the common cold) thrive in low temperatures. At low temperatures, our bodies may produce fewer antiviral immune signals and leave us more vulnerable to infections. Cold temperatures and low humidity, characteristics of the “cold” season, are associated with increased occurrences of acute respiratory tract infections.
Anti-Inflammatory Effect: A 2000 study published in CHEST suggested that the mild anti-inflammatory effect conferred by chicken soup could be one of the reasons behind the soup’s ability to mitigate symptomatic upper respiratory tract infections like the common cold. Typically, when an individual comes down with a cold, the body responds with inflammation in the upper respiratory tract. The inflammatory response in turn signals white blood cells (WBCs) to migrate to the region. This migration of WBCs into upper respiratory tract may contribute to the commonly encountered cold symptoms, such as stuffy noses.When the researchers measured the ability of the WBCs to migrate through a filter from one side of a chamber to the other side, they found that fewer cells migrated to the other side of the chamber in the presence of chicken soup. As a result, the scientists of the study propose that some ingredient in the soup may be responsible for slowing or blocking the migration of these WBCs to the upper respiratory tract and thus, aid in relieving cold symptoms. 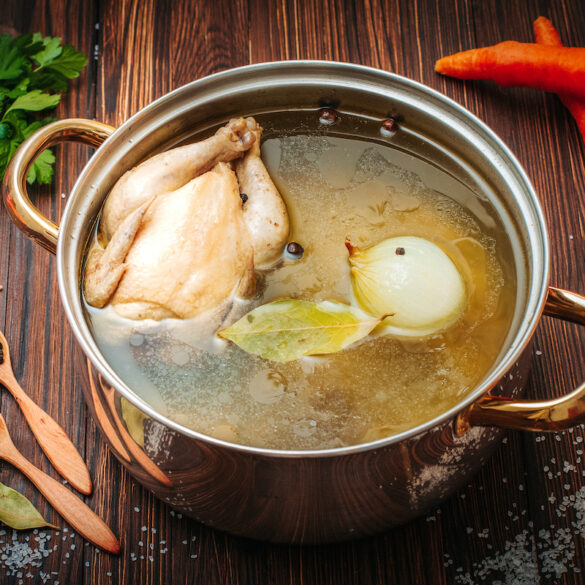 juice of one lemon

The base broth: Fill a large stock pot with the 2 litres water, add the chicken and onions. Bring to a boil, reduce the heat to medium and simmer for about 1 hour. Skim the broth frequently (skimming the fat off the top of the broth will result in a clear, clean soup).

Once the chicken is tender and falling off the bone, lift out of the broth and place in a big bowl. In the meantime, turn the heat down to low and let the broth simmer gently while you debone the meat.

Remove all the bones and skin from the chicken and discard. Place the meat back into the simmering broth.

Add the potatoes, carrots, celery, spinach, parsley, thyme leaves, lemon rind, and the cold chicken stock. Turn up the heat to medium, bring to a fast simmer and cook for another 20 minutes until the potatoes are cooked through.

Remove the pot from the heat, add the lemon juice, add salt if needed.

Serve any which way the occasion calls for.

This broth is a guaranteed fixer-upper when you are feeling under the weather, or just need some healthy, clean, goodness in a bowl.

Are we Food Secure in British Columbia?