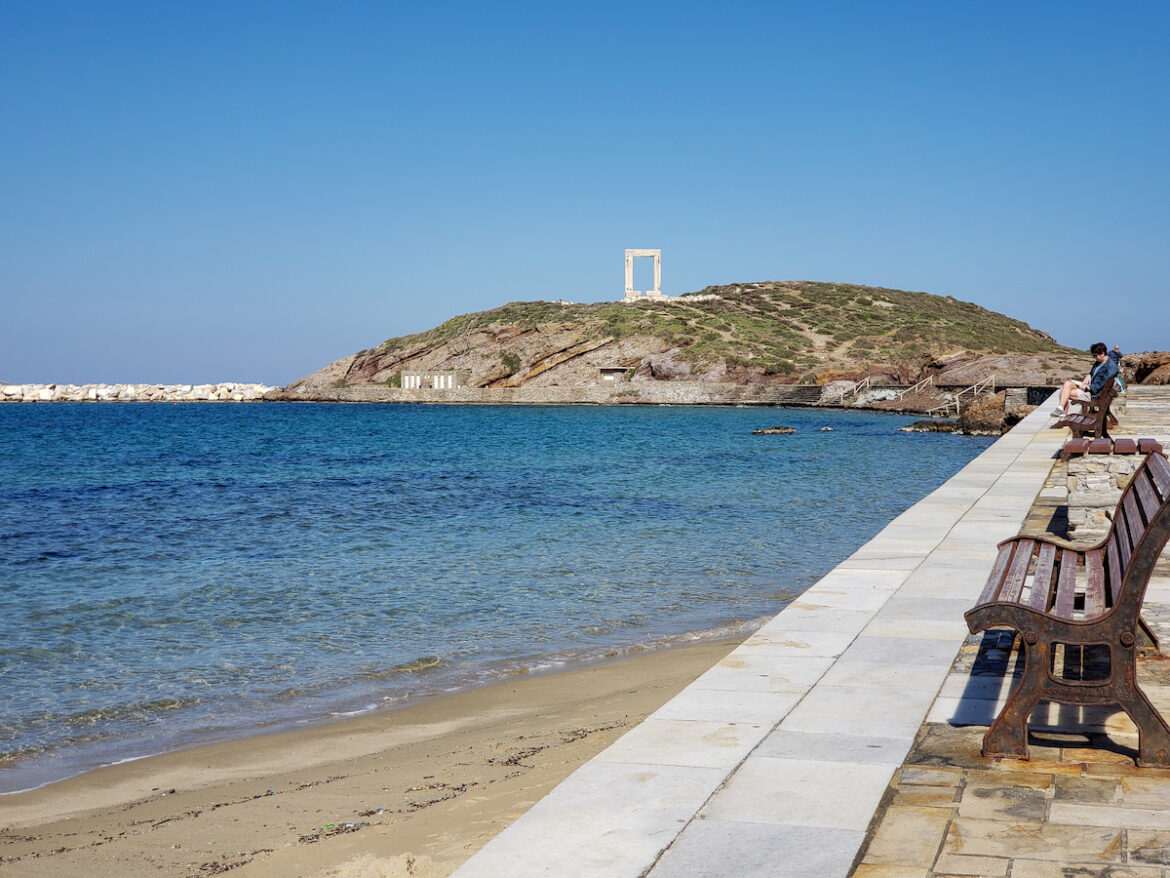 In Honour of our Fathers – Giannakis Suites in Filoti, Naxos, Greece

“When I am Filoti I feel like I am at the centre of the world.” – Katerina, co-owner of Giannakis Hotel and Tours.

Apollonia, a freestanding marble doorframe, or portara, is the only remains left of a never-completed temple to Apollo built in 530 BC. This doorway stands like a magnificent portal to all and sundry stepping foot on the island of Naxos.

Naxos old town in central Hora is a maze-like venetian settlement of yore. From the castle perched at the peak of the old village one can see a windswept landscape in one direction, and in the other direction lovely white beaches with gentle warm waves teasing its edges. Vibrant green farmlands sweep away and up into the mountains behind, while fluffy sheep and cautious goats dot the vast mountainsides.

There are ancient wells and ruins, old castles, art, museums, and many villages, all abuzz with the passion of the culture. Naxos is peaceful yet so very much alive, alive with life.

The famous Naxos potatoes is grown right on this verdant island, and cheeses  vineyards, orange groves, and lemon trees are the staples of every home. Then there are the olive trees of every family, handed down for centuries.

“When I am Filoti I feel like I am at the centre of the world,’ said Katerina, co-owner of Giannakis Hotel.

Filoti is at the centre of Naxos Island, and as the locals say, it is the centre of the world. It is a gem, a beauty, a tranquil piece of life carved into the loving arms of Mount Zeus.

It is here, at the centre of the world that Giannakis Filoxenia Hotel was inspired, a place of warm welcome oozing with filoxenia for the world-weary guest, a hotel to honour the fathers and grandfathers of Katerina and Mihailos, the wife and husband hoteliers.

Mihailos is Greek born and bred, and Katerina is Canadian by birth, but Greek to the core of her soul.

“When I was little my parents never stopped talking to me about Greece and Naxos. I grew up loving this place without even having seen it. After the age of 7, they would send me every summer to my grandparents’ house in Greece and I would spend my summers in Athens for a bit, but mostly in Filoti, Naxos. Our summer house in Filoti was my favourite place on earth. I felt like I was in paradise every time I came here. It was really difficult for me to leave this place when it was time to return home to Quebec, Canada,” explained Katerina.

Katerina grew up in Saint-Hyacinthe, Quebec, where her parents own Roma Pizzeria Restaurant, a family business handed down from her grandparents.

Her grandparents emigrated from Greece in the 1960’s due to Economic and political reasons, which motivated more than one million Greeks to migrate, both reasons were directly linked to the consequences of a 1946-1949 civil war and the 1967-1974 period of military junta rule that followed. From 1950 to 1974. most Greeks emigrated to Western Europe, the U.S., Canada, and Australia. Official statistics show that during that period, 80,200. Greeks moved to Canada.

Katerina’s grandparents were among those numbers in the 1960’s. Two very young people, without the safety net of family nor money, and not a word of French could be uttered between them. Her grandfather worked as an employee in many restaurants in the Montreal area, but ultimately, he wanted to create his own business. He worked tirelessly in order to put aside enough money in order to realize his dream one day.

“What impresses and inspires me is that when they opened their own restaurant in 1965 both of them did not speak the language, and yet they managed to survive. My grandfather couldn’t write in French so he had to memorize all the orders by heart so that he could serve all of his customers,” Katerina said, the awe still evident in her expression.

Filoxenia is in Katerina’s blood so it was not a coincidence her favourite class was called International.

“In Saint-Hyacinthe, I attended a private school and in a class called International, teachers promoted the idea of travelling. We met people from many different cultures because we had exchange students from all over the world. We had many interesting projects, for example we had to organize real life events through workshops and fieldwork at home and abroad. They taught us the importance of voluntary work and how one person can make a difference in this world. They made us believe that we can actually change the world if we work hard.  I believe that this school played a very important role on my future decisions,” she said.

Mihailos, Katerina’s husband, is an electrician and a talented carpenter. He hails from an aristocratic family.  His grandfather, Mihailos, whom he was named after, was a well-known judge who owned a large territory of land.  At that time, his father, Giannakis, was one of the most educated people on the island so he was elected president of the highland of the island.  Mihailos’ house is a big house with a beautiful garden which is situated next to the village’s church and Barozzi’s tower here in Filoti.
Barozzi Tower on Naxos, an imposing structure dating back to 1650, stills stands at the heart of the village Filoti –a vestige of the era when Naxos was ruled by a Venetian duke of the same name.

“Unfortunately, three months before our wedding my husband’s father, Giannakis, passed away. Mihailos was really heartbroken,” she explained with sadness.

“He was also stressed because he had inherited a huge building. It used to be a hotel but needed a lot of work in order to be functional again. We didn’t know much about the hospitality business but I thought it would be the perfect thing to do to commemorate his father’s memory and my grandfather’s history. He was scared to invest in this idea but I saw it as a good challenge and I insisted that we take the risk and work as hard as we can to make this business work again, and try to make it profitable, of course.”

“It is a demanding job. However, we are happy when we look back and see how much we have achieved in these few years.  Every time we have a guest that leaves a good comment it makes us happy and gives us the energy to continue working on this project,” Katerina concluded.

The entire ground floor of Giannakis Suites is now fully operational and quite popular with tourists from around the world. There is a reason why this is so…the hotel rose up, like a Phoenix, out of the old and has now surpassed its past glory. Giannakis suites is a well-ran home away from home, it is neat and precise, blue accents and white washed walls. Humble, but highly convenient in all things hospitality. High-speed internet keeps the world at your fingertips, newly outfitted showers with unlimited hot and cold water, and environmentally friendly toilets are true signs of the times. And most of all, owners that are not only hoteliers, but people living the word filoxenia. They treat guests like they are guests of their very own home. Katerina and Mihailos are warm and caring, always thinking from the guests perspective, and are so willing to go above and beyond to ensure their guests have beautiful and memorable experiences in Filoti, on the island of Naxos, Greece.

The ancestral home at the top of the village is one of the most beautiful get-away experience on the hospitality market in Naxos, Greece. On one terrace one can view the whole village spread out like a painting, and in the garden terrace one can quickly forget they are in a village.

Mihailos is also a highly respected guide in the area, he knows the mountain and island like the proverbial back of his hand and will often lead tours on amazing hikes, while helping visitors “experience Filoti like a local”.

Old Greek Men In a Filoti Taverna on...