This Herby Marinade is all you need for this time-saving aromatics.

My mama and my sisters made this Guyanese Herby Marinade often, this aromatics is as much a part of our cuisine as all other Guyanese dishes.

Guyana is made up of six cultural cuisines, hailing from six influences…Indigenous Guyanese, African Guyanese, Indian Guyanese, Chinese Guyanese, Portuguese Guyanese, and some Scots and Brits that were left behind after Independence.

The food of Guyana is just simply brilliant, the cuisine has managed to meld as easily as the people did. In every house you will find people of mixed descents, and every culturally-influenced meal is considered a Guyanese meal. Pepperpots, cookups, curries, chowmein, garlic pork, pastries, all arrived from various places. Today, they are all just a part of our everyday menu.

This Herby Marinade is a South American influence – it is a way more flavourful version of the traditional chimichurri.

Now that summer is here, and herbs are growing abundantly in the garden or in those little balcony pots, you can put them to use. Herbs love being cut, sounds weird right? Well, the more you cut herbs, is the more they grow, and they grow up and out so by summer’s end you well have loads of herbs still blooming.

To preserve your herbs, make this marinade and seal in sterilized jars, make sure they are airtight. Store in the fridge for up to 6 weeks.

Dry herbs by simply using kitchen string to tie bunches together, and hang then by the stem from any pantry or kitchen hook. Dried herbs can last for a year.

Use this Herby Marinade to season meats, fish and seafood. Add to your slow cooker. No need to chop, mince and grind, every single time. Enjoy! 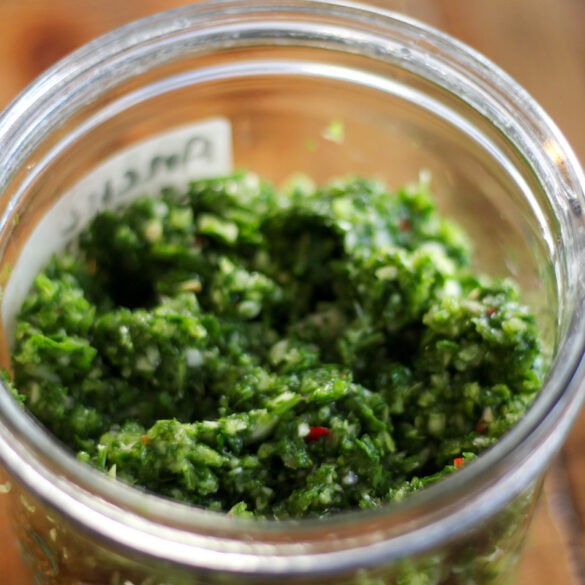 2 Thai red chillies, deseeded (if you don’t like the heat)

Plug in the food processor.

Add all the ingredients into the processor, and blitz well. Stop, scrape the sides down, and blitz again.

When the herby marinade has achieved a finely-minced consistency, it is ready.

Store in jars that can be tightly sealed, and keep in the fridge for up to 1 month.

Use this marinade as your sous chef. This herby marinade saves you about 30 minutes of cooking time.

Healing Chicken Soup is a bowlful of pure...