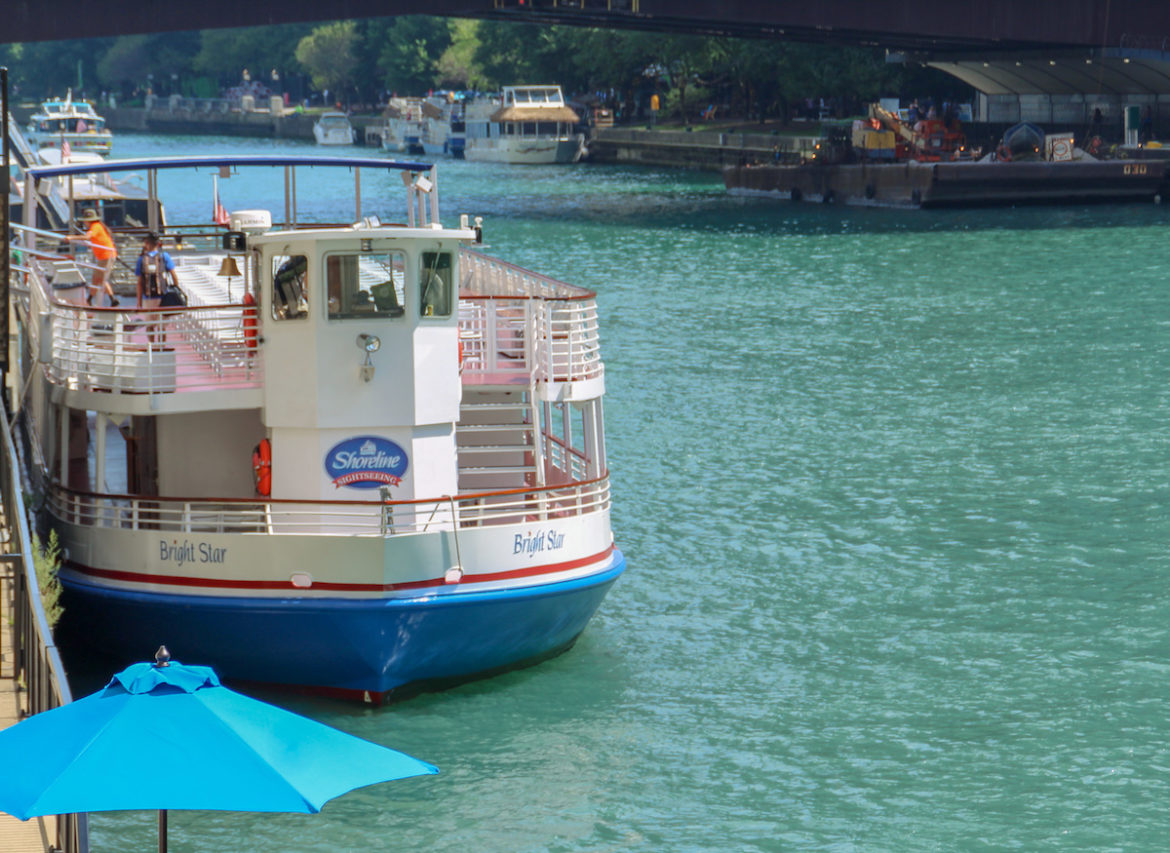 Don’t Miss the Boat in Chicago

Cruising on a green river winding through architecture in Chicago is something not to be ignored when visiting this friendly Midwest city.

Chicago, on the southwestern shore of Lake Michigan, was incorporated as a city in 1837, it is 176 meters above sea level and covers an area of 60,000 hectares. The city is traversed by the Chicago and Calumet rivers. Chicago’s extensive parklands, including 3,000 hectares of city parks attract an estimated 86 million visitors annually. Today, thousands of budding architects, and lovers of architecture, also travel to the birthplace of the skyscraper. Chicago, Illinois.

Every day is a good day to travel Chicago city.

Fall, winter, spring or summer there are things to see and do.

Fall is eathical’s Tess Bacchus’s favourite season, the golds and reds of autumn, the crisp air cleansing away the heat of the last summer, the fall shopping on Michigan avenue, and the arrival of the autumn dishes on the restaurants’ menus. I, on the other hand adore summer in Chi-town.

Here at eathical, our team members are filled with adventure.

At any given moment one of us is somewhere else rather than at home, even if it means rediscovering our own city. eathical.ca writers focus on travel, food, and human-interest stories. We love exploring global locations “just like a local”. We are forever thankful for these opportunities to explore the world around us.

Tess Bacchus, is a Chicagoan and she will often rediscover her city in mini-staycations. On this trip, Tess invited me to join her on the 90 minutes’ river cruise to experience the architectural highlights of Chicago.

The morning started with us enjoying a cup of dark chocolate mocha in the early morning sun, right in the heart of downtown Chicago.

The river, a pale turquoise colour and calm, added a gentleness to the surrounding environment of artsy steel, glass and sandstone buildings. 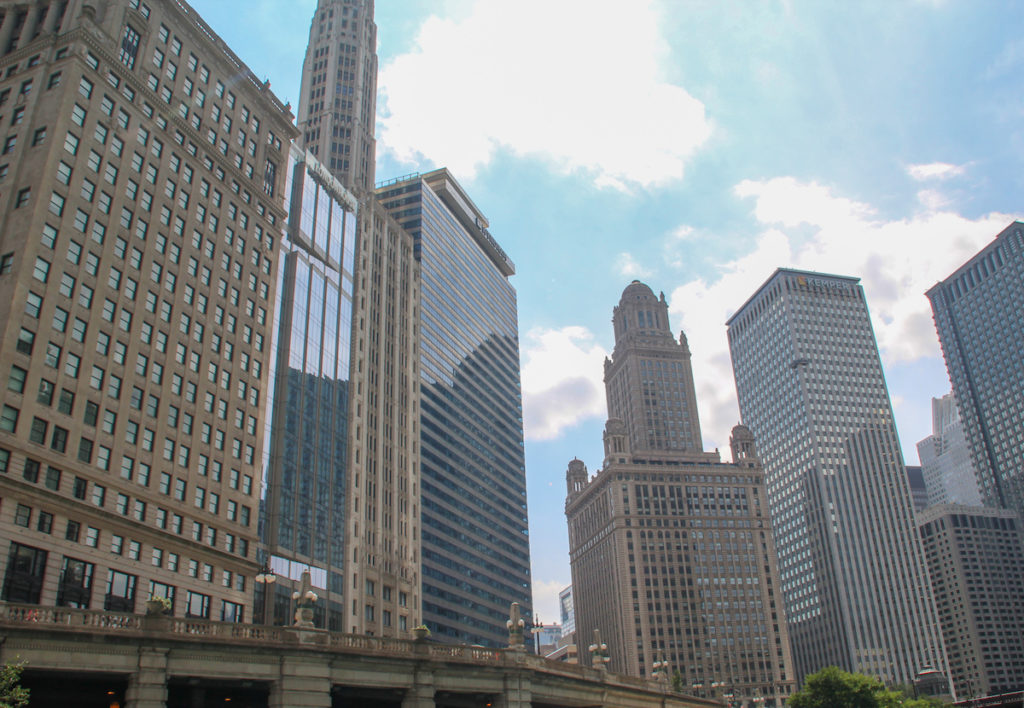 First of all, The Chicago Architecture Foundation Centre’s CAC-certified volunteer tour guides—called docents—interpret more than 50 buildings along the Chicago River. You’ll find out how Chicago grew from a small settlement into one of the world’s largest cities in less than 100 years. In 90 minutes, you will get the real story on Chicago’s architecture and its history.

The boats sail smoothly under the many bridges of Chicago. Each bridge is a major street, like the iconic Clark Street Bridge that spans the Chicago River in downtown Chicago. This bridge, which connects the Near North Side with The Loop, is a type of bridge with a pivoting section that is raised and lowered using counterweights. 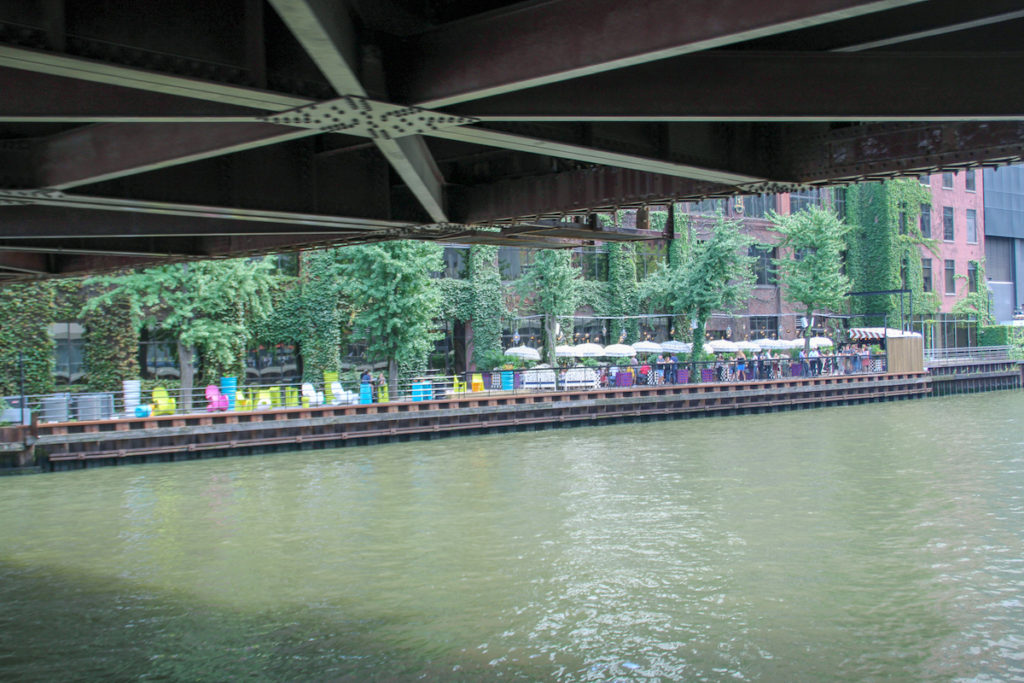 I loved this building, so massive and imposing in its sheer magnitude, as we sailed by, almost inconsequentially, at its feet. 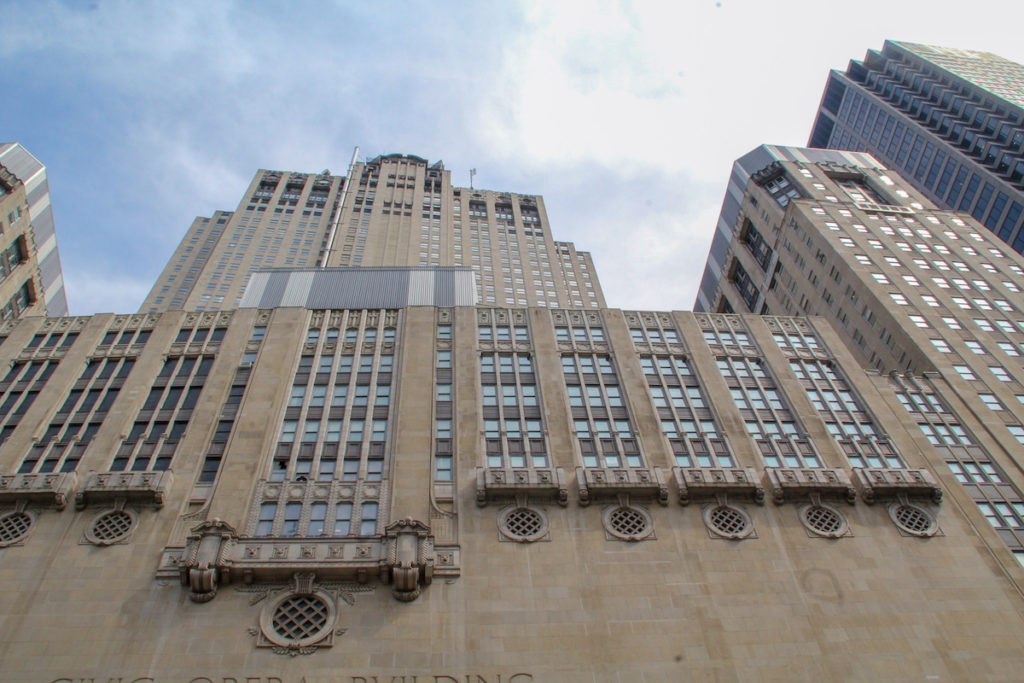 The boat sailed steady and slow down the centre of the river, allowing an uninterrupted flow of interesting architecture to slowly glide by.

Did you know the Chicago River is a reversed river?

To reverse the flow of the Chicago River, a 28-mile canal was built from the south branch of the river, through the low summit and down to Lockport. It was completed in 1900. The sheer vision, chutzpah, and work it took to reverse the natural flow of a river is mind boggling. 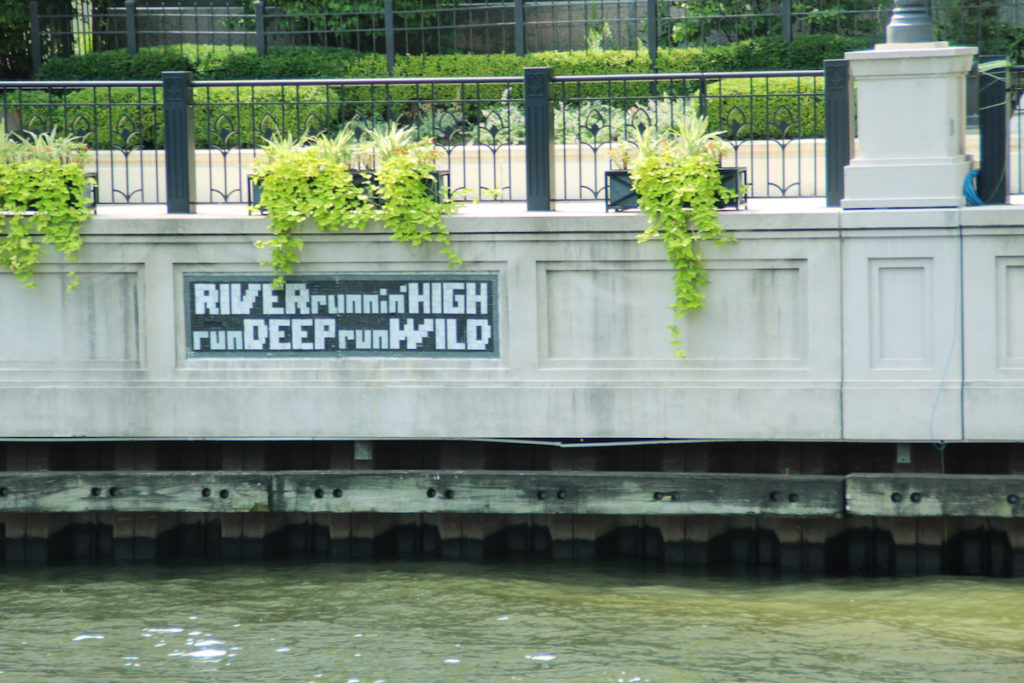 The Marina City complex was designed in 1959 by architect Bertrand Goldberg and constructed between 1961 and 1968. Marina City was the first urban post-war high-rise residential complex in the United States and is widely credited with beginning the residential renaissance of American inner cities. 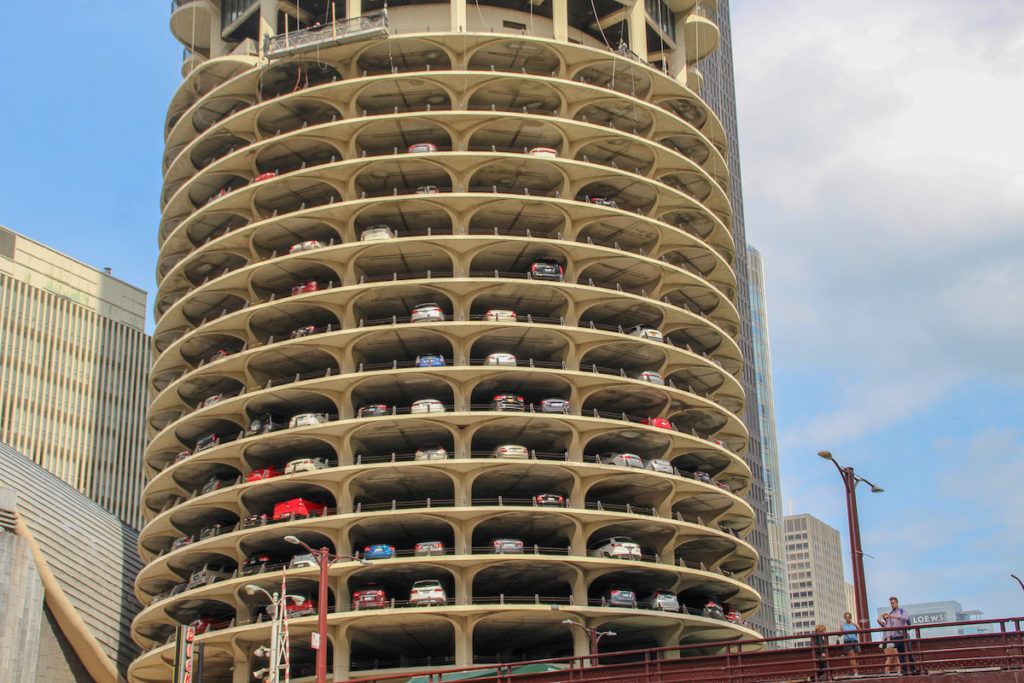 The sight of vibrant green vines crawling up the exterior of red brick buildings will always remind me of Chicago. 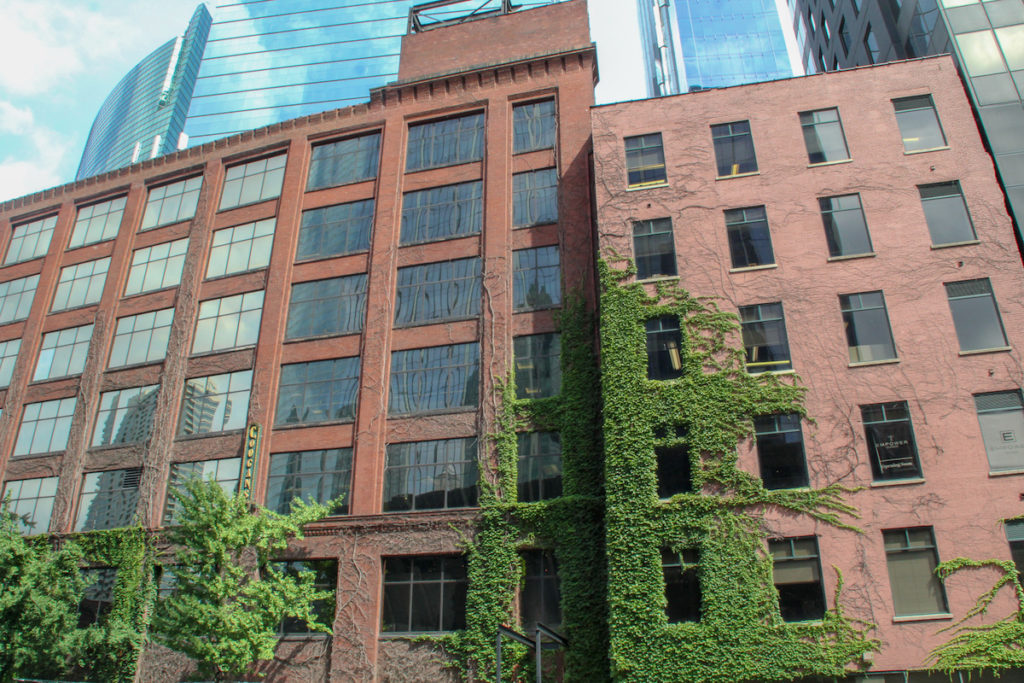 The 110-story, $840 million office tower, formerly called the Sears Tower, is a landmark in Chicago and one of the tallest buildings in the world. It was renamed The Willis Tower in 2009 after the insurance broker Willis Group Holdings leased the naming rights. To this day, Chicagoans refuse to refer to the tower as anything but the Sears Tower. 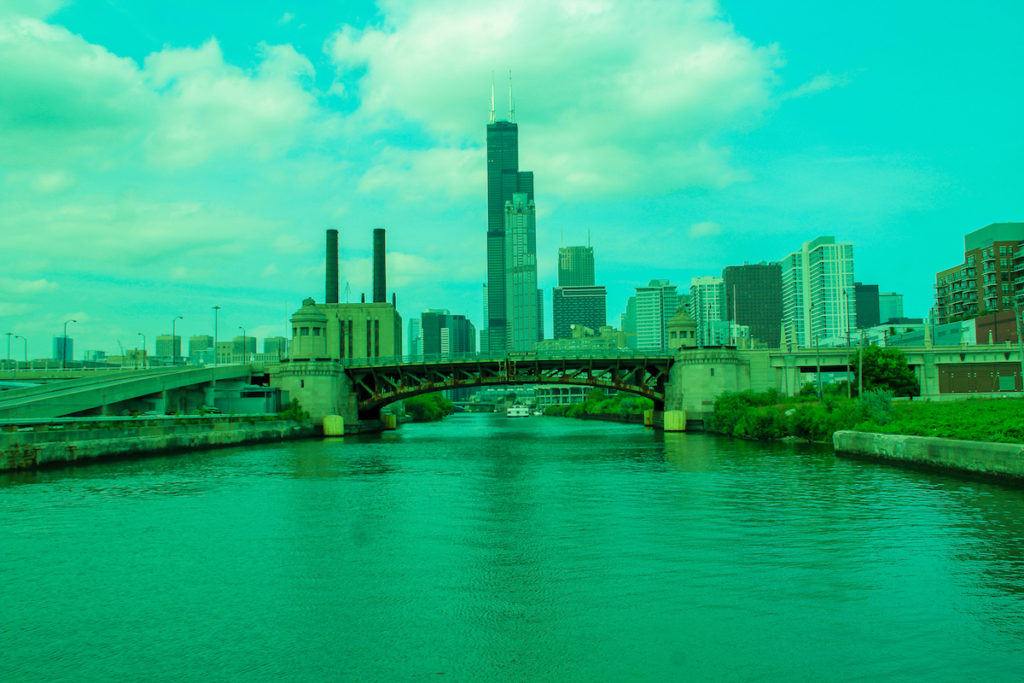 Lake Point Tower. The unique clover shape of this residential building was designed to let strong lake winds more easily slip around its edges, reducing their direct effects on the structure. The design was based on a never produced, 18-story design by renowned architect Ludwig Mies van der Rohe. I Loved the way the bronzes, brasses and golds of this building shone in the morning sun. 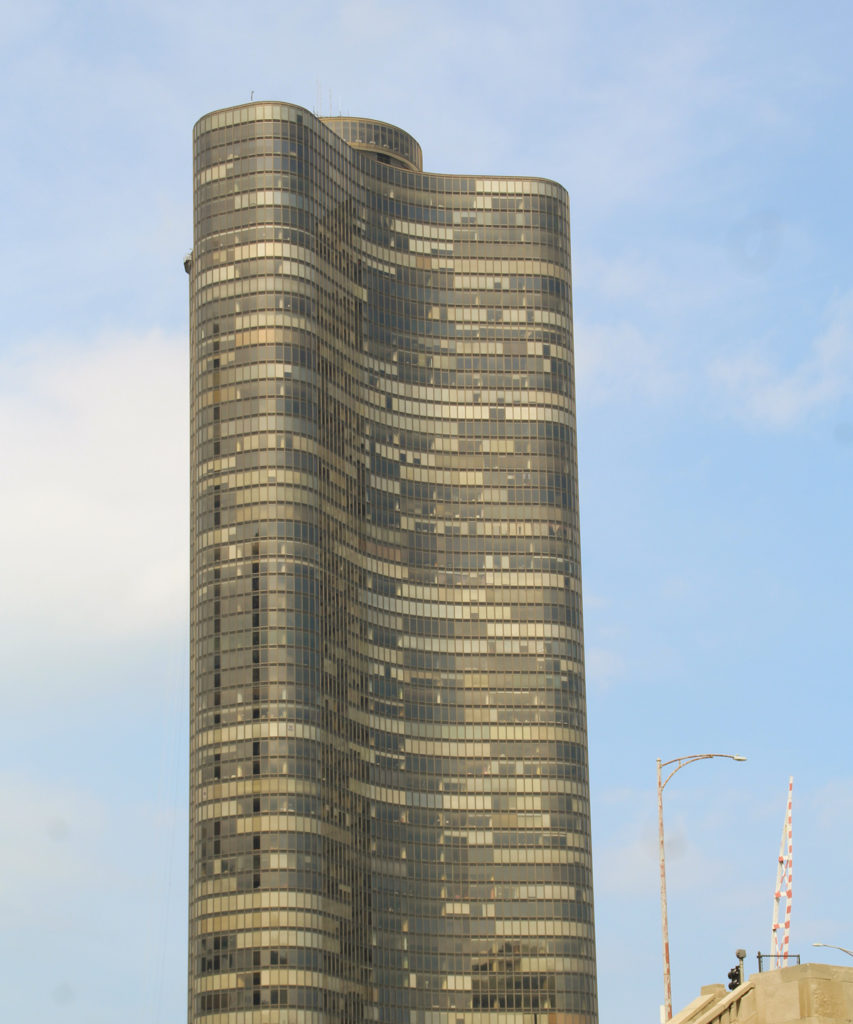 Navy Pier. Built originally as a port facility for commercial shipping and Great Lakes excursion boats, Navy Pier sits on a 25-acre peninsula. In 1995, the pier re-opened to the public after a 150-million-dollar rehabilitation. If you are in Chicago you must visit the pier for an evening of fun and one of the summer nights’ fireworks. 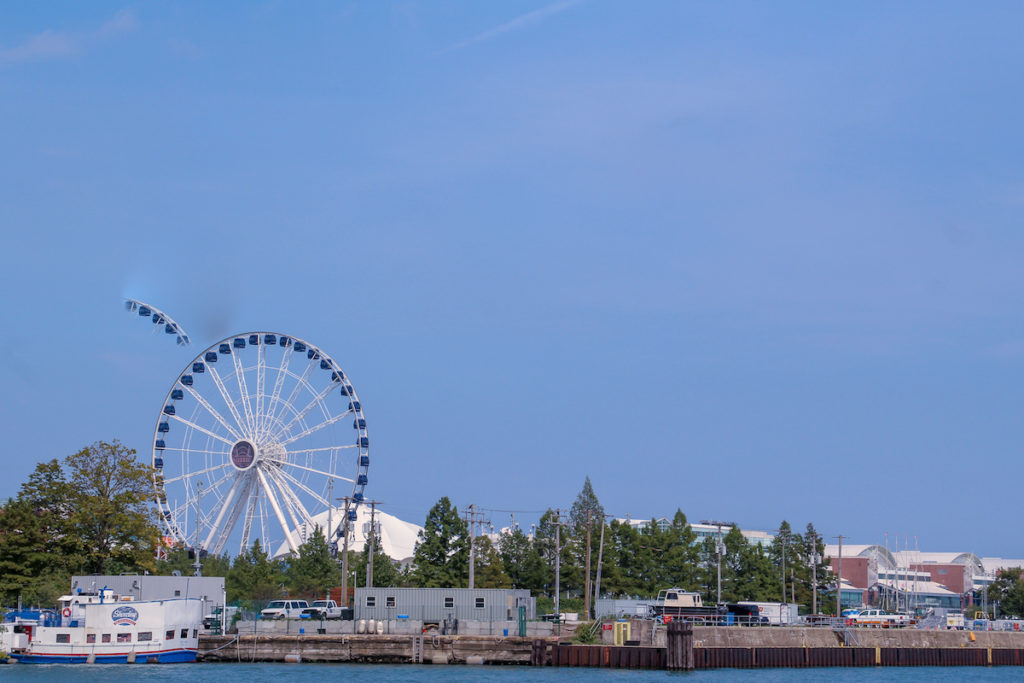 What can I say about Chicago…

One of the first and lasting impressions you will get with Chicagoans is that they are nice, that is not a myth, they are just nice. they will strike up a conversation with you without hesitating. Strangers will happily give you directions if you are lost and by the time the conversation is over you will have a list of places to visit, places to eat, and what not to miss, plus where to avoid. Chicagoans love their city and they take it as a personal compliment when you visit. I have been a frequent traveler to Chicago since the early 1990s.

To this day, I stand by my first impression…Chicago is the prettiest city to visit, filled with the friendliest people I have ever met.

By the way, here’s another piece of Chicagoans stubbornness, the refusal to call The Bean anything but The Bean. Cloud Gate (The bean) is a public sculpture by Indian-born British artist Sir Anish Kapoor, that is the centerpiece of AT&T Plaza at Millennium Park in the Loop community area of Chicago, Illinois. Constructed between 2004 and 2006, the sculpture is nicknamed The Bean (by Chicagoans) because of its shape. 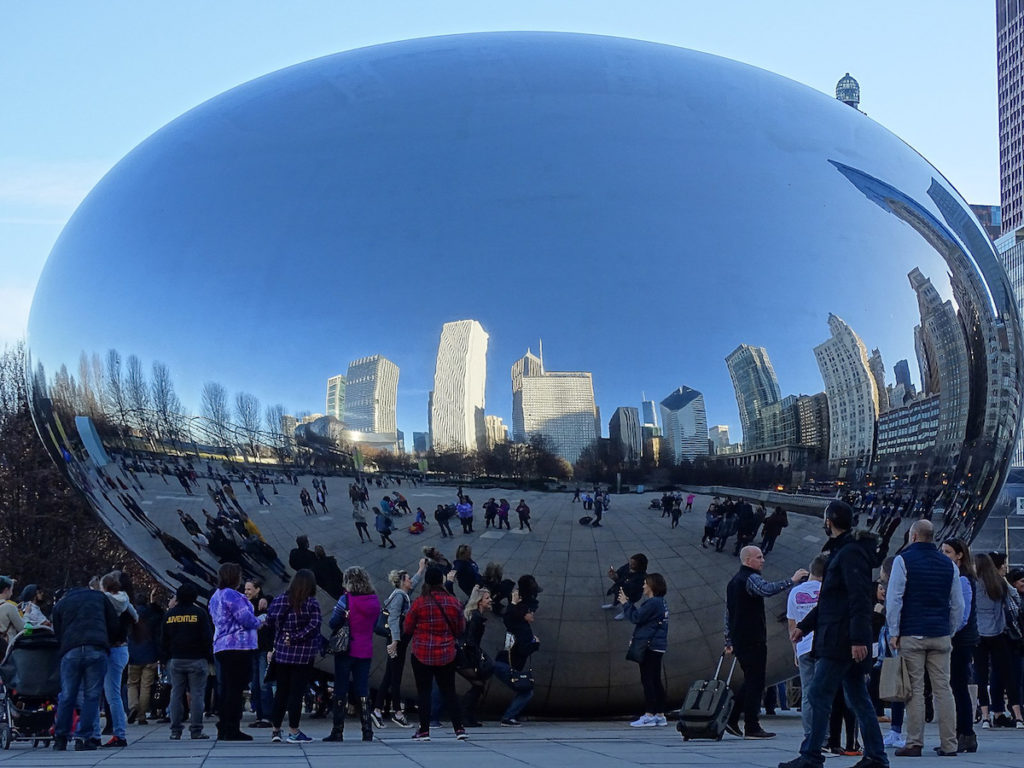 All Images by Tess Bacchus

Singapore is overhyped and underwhelming

The Women in the National Archaeological Museum, Athens,...